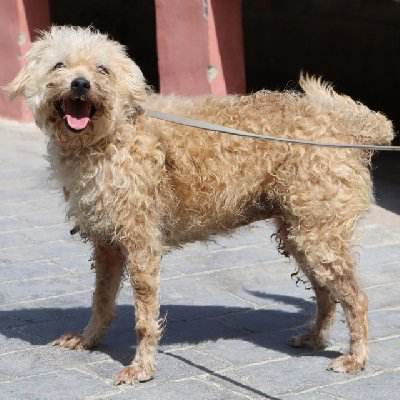 She was given as a little puppy to a homeless Belgian man who had been living on the street here in Fuengirola for years. A man with a good disposition but life was not going well for him. He had had several dogs, but they were often stolen or confiscated, taken by the police. Shakira is the one we have known the longest, she has faithfully accompanied him for years, everywhere, sleeping on the beach, somewhere under a tree or under an abandoned bridge. Or waiting for her owner for days, tied to a bank.Waiting for food from some shops that her and her owner had known for many years.

When Shakira was ill, he called us and we took care of her medication or temporary shelter until the weather changed. We always vaccinated, cared for, and also sterilized her. So the years passed, and each went on his life. Shakira was and is still the most pleasant, well-behaved soul you can imagine. She is streetwise, but most of all, indescribably sweet.

Last week an English lady came to the door with a dirty, smelly, neglected dog. We hadn't recognised her. They had found the dog at the entrance of the Burger King, where no one was taking care of the poor animal. She craved a little water, the lady said, but nobody looked at her. And so she came in. When we checked the chip we suddenly knew who she was - Shakira ... of the homeless man.

Afterwards I contacted people who knew the homeless man, but he must have given her up because he was in the hospital. He doesn't answer his phone anymore. And now Shakira is with us. We love this little sweetie. After all that she has endured, she was once again left to her own devices. Normally a dog like this goes to a killing station, you can imagine. She doesn't stand a chance there!

An oldie who is actually not an oldie, because she is barely 8 years old, but she seems older due to the difficult life she has gone through. How often did we hear that she had been kicked together with her owner, how often have we taken her in because daddy had problems again, because daddy had been turned down (for accommodation) and the dog was in danger. We kept taking her, but he always came to fetch her. A defenceless person fallen by the wayside, his dog was his everything. But now he can no longer look after her.

Little Shakira is now looking for an owner who will give her stability and a wonderful life. She is ready to be pampered, but this time without fear or having to be on her guard. No more kicks, nor people who despise her but instead owners who appreciate and care for her like a true best friend. Shakira, ... a defenceless homeless dog.

For more information about Shakira, please click on her name.
Posted by Clodagh at 10:11 AM