Fabienne's Dog of the Week: Groundforce


From chain to sofa to asylum ... and a happy ending 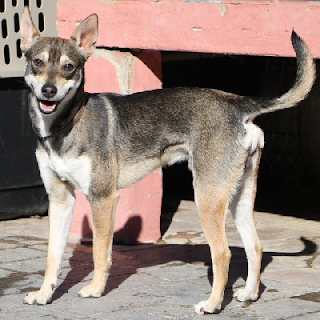 He lived on a short chain in a dirty cage, could barely move and had to live here day and night, as a little puppy.  No one noticed or cared about his need for attention and love. His life was a big hell. Until a female saw him and could not believe that here in this backward hole a little dog had to watch his life pass by this way. She took him and asked the owner to give him up. That was very difficult because he thought his dog had such a great life already.

Eventually she succeeded and took Groundforce home. He was the happiest dog in the world, played with the other dog in the house, went for a walk and then hung out on the couch.  His happiness could not continue; the day came when her mother told her she could no longer keep the dog. Since she lived with her mother she had to obey. He had to go.  And so this sweetheart came to us.

He is a rather active dog that wants to go for walks and definitely needs exercise, that's our experience it, at least.  He is very affectionate and docile, intelligent and considerate, a good and definitely worthwhile dog.  He looks like a mini Husky with his beautiful markings, a beautiful play of nature. He's a sweetheart, that's for sure!

Happy Endings. This special dog is in pre - reservation now, which means he will be adopted if everything goes well. Nevertheless you can read more about him by clicking on his name - Groundforce.