Graciela: such a sweet character, despite the challenges she's faced 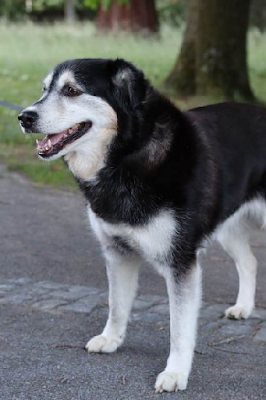 Sometimes dogs are doubly unlucky. Such is the case with gentle Gracielta, a beautiful Husky cross. First she was separated from her puppies, who were dumped on their own in a box in front of our gates. Suddenly, two weeks later, Graciela stood at our door with another puppy, Gotita. We suspected that she was also the mum of the pups we had taken in a couple of weeks before. When she saw them there was no doubt at all. She was beside herself with happiness to be reunited with them. It was lovely to see.

Graciela's puppies were adopted and she was adopted separately together with her daughter Gotita.  But due to circumstances beyond their control, circumstances having nothing to do with these two darlings, they had to look for a new home. At first we wanted to keep them together but later realised that they'd be fine if they were adopted separately. Gotita has been in her new home since May this year and is doing well.

Now it's Graciela's turn. She's been with us for nearly five years and is 9 years old. It's time that she had a new home where she can be loved and spoiled. Graciela is a calm, soft creature who sometimes needs to have a little time on her own to have a  nap. She has very soft, long, thick fur. She's a whopper and also an affectionate cuddle bug. She loves to go for a walk and is fine with children. Who will take Graciela into their home and their heart? Don't let her wait any longer.