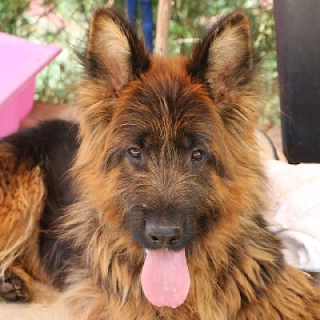 Mafalda was born in Granada, a beautiful Shepherd puppy with beautiful long hair, nice features, beautiful to see, so her fate became that of a brood mare. However, she has hip dysplasia so after giving birth to a few litters she could no longer serve her masters and was put into the killing station. From there she was adopted by a deranged woman who put her in a deserted yard because someone gave her money every month under false pretences to support Mafalda. Someone had seen the dog at the killing station on Facebook, and asked if someone could save her and this sick mind responded willingly to this call, just to make money.

However, Mafalda was completely left to her own devices, along with many other dogs, and that in a heat of 35 degrees, without a drop of water,.  The fleas and ticks danced around in such a way that each of them had severe anemia and a lot of dogs died. A terribly sad and painful rescue was undertaken along with several organizations.

Mafalda came to us. After calling the person in whose name her chip was still registered, her life story was revealed. As told above. A sweet lady, with a sad story.

For more information about beautiful Mafalda, please click on her name.