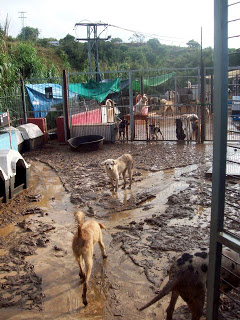 This was the sight that greeted me on the morning of May 19th 2011. My very first visit to the Refugio. I had arrived the night before and lay in my apartment, listening to the raging electric storm overhead. Next day, not being very clear of the directions, I took a taxi. It dropped me off in front of the gates. Everything was very quiet except for the hum of machinery (it turned out to be generators). I rang the bell, nothing happened. Unknown to me the terrific storm the night before had wiped out the electricity. Had caused a landslide that had engulfed the Refugio. They lost all their supplies - bedding, medicine, towels, food - everything. Worse, some of the dogs didn't survive. But people rallied round. Offered temporary homes for the most traumatised dogs, brought the generators, offered food, bedding, medical supplies. And, most importantly, their labour. Another volunteer handed me a broom - I never looked back. 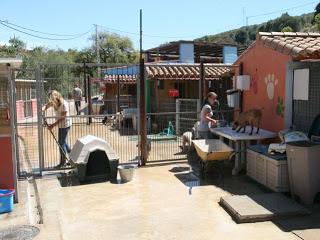 The storm and landslide was overwhelming and tragic setback, but in the true spirit of ACE, everyone pulled together, supported each other and worked tirelessly to the point of exhaustion to recover. You would not be able to tell from this picture, taken at the same section, just a year later, that there had ever been such a disaster. Here is a link to the original post

After the landslide ... the drought

Just over a year after the landslide .... came the drought. The well ran dry and with it the only means of cleaning the refuge and more vital of giving clean drinking water to thirsty dogs enduring the fierce summer heat. The Refugio does not benefit from mains water and the municipality is not about to supply it. This truly was a crisis. We could have paid for tankers - except that we couldn't - at 150 Euros a day for 10,000 litres we simply couldn't. A tank would have scarcely supplied us for a day. 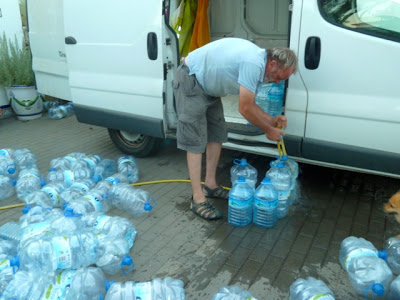 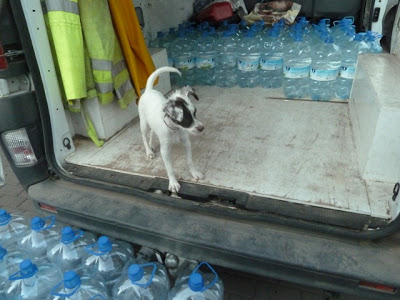 We begged the municipality to put us on mains water. Deaf ears. Our wonderful volunteers and supporters fundraised. The English language newspaper Sur ran a wonderful article about our problem. There was a fantastic response - we were literally swimming in water. It was a godsend, but even then only a temporary solution.

The permanent solution came some months later with the most amazing and generous donation of a deep pump by BIMEX BV` who not only donated the specialist pump but also paid for it's transport from Holland and the specialists needed to install it. You can read the original stories
here

As if we didn't have enough problems ... next came FIRE!

During our ongoing drought difficulties ... the worst possible thing happened. Fire! We were lucky that time, but it was another wake up call. Next time - and there would be a next time - we needed to have systems in place. Though how you can evacuate a refuge with over 250 dogs and their carers at short notice. We were spared that time, but the next one several years later came right to our door. Luckily the wind changed direction.