On Monday 4th November I set off with my brother to drive from Leicester, in the middle of England, to Eindhoven - a round trip journey of 795 miles - to pick up beautiful Dundi at Eindhoven airport the following day. I had met Dundi in September at the Refugio. Now called Teddy Edward - because he looks like a teddy bear (knuffelbeer) - he is the sweetest, quietest most affectionate little dog.

Two of our students, Maud and Ilse, escorted Teddy together with Roonie, Mertens and Copper. It was lovely to see these two sweet girls again. We are so lucky to have such wonderful helpers. It was particularly heartwarming to see that Roonie had found a loving home with adoring adopters, Erik and Sandra. And the same with Copper.'s adopters I had met both these dogs in September and knew their story. And fearful Mertens is now surrounded by love in his new home.

It's always a joyful occasion to see any dog, or cat, find their forever home. But there's an added poignancy when you know something of their history or, indeed, have been personally involved. And even more joyful when one of the darlings is coming home with you. Here you can see their departure from Malaga, arrival in Eindhoven and their sad stories, which have resulted in very very happy endings, thanks to everyone at ACE and the love of their adopters.


The journey begins in Malaga 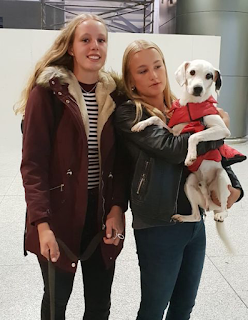 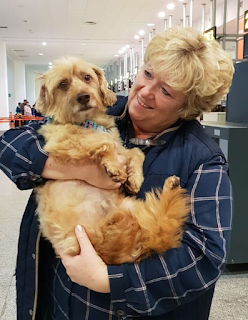 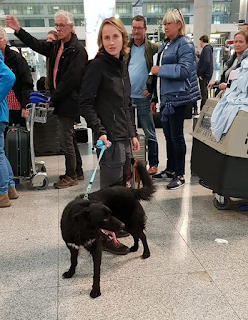 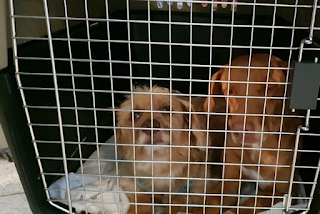 Dundi and Martens set off for Eindhoven


The arrival in Eindhoven
We did a group photo.  I don't have a copy. If anyone does, I'd love to have it. 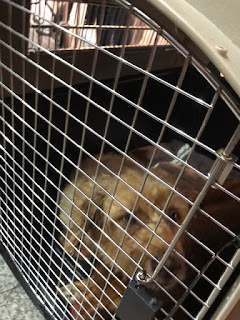 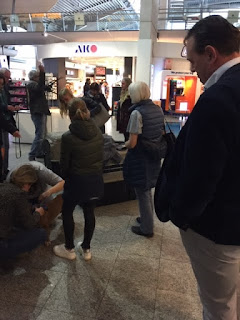 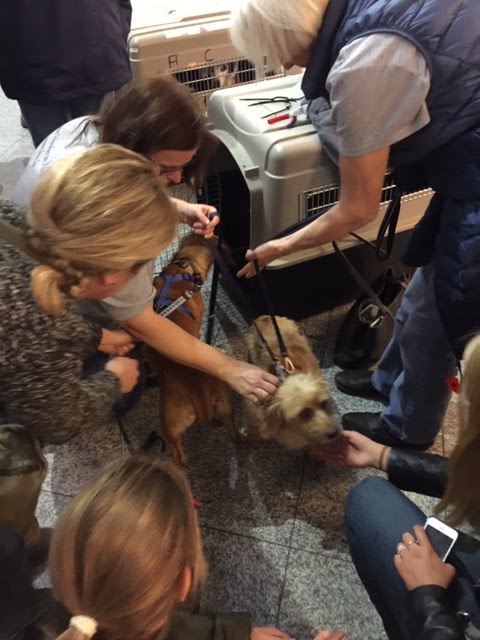 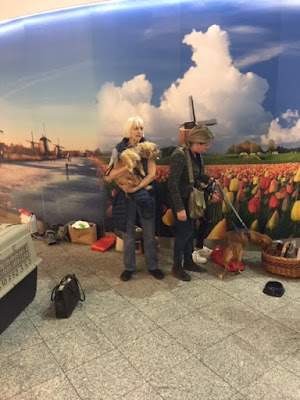 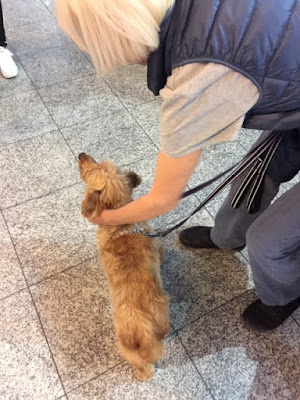 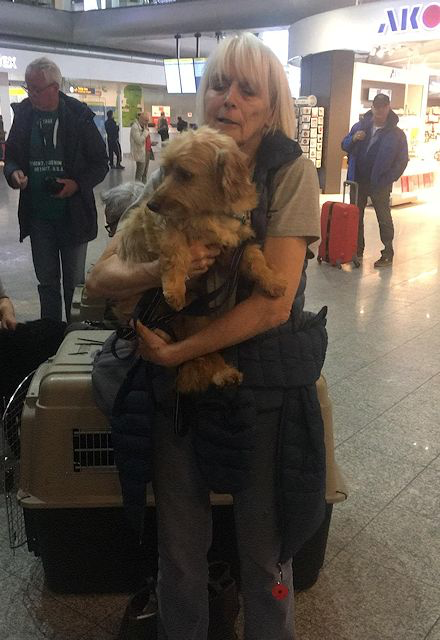 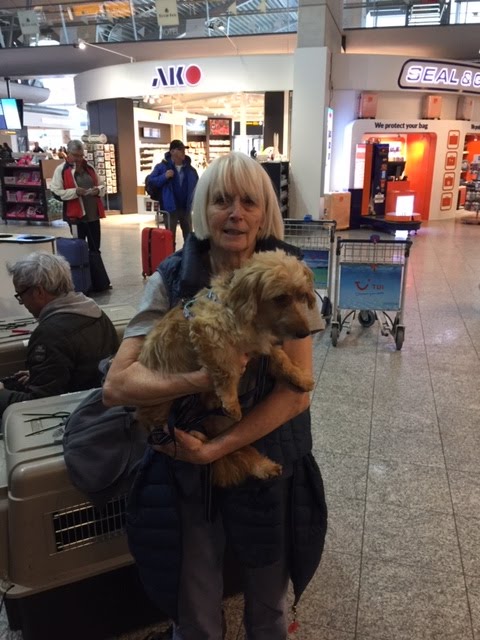 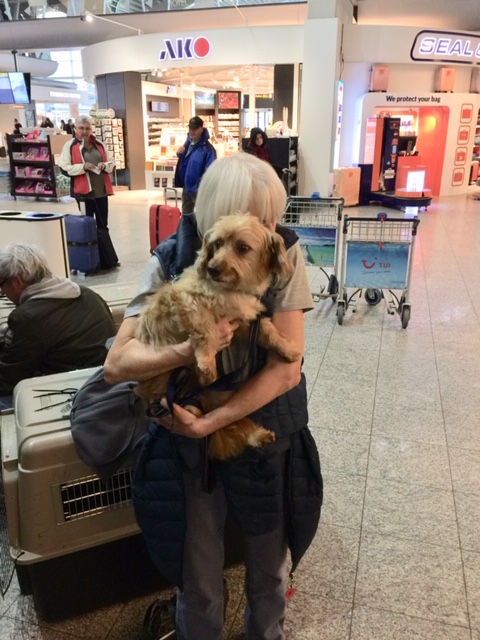 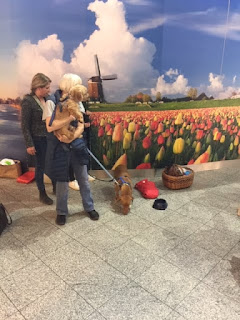 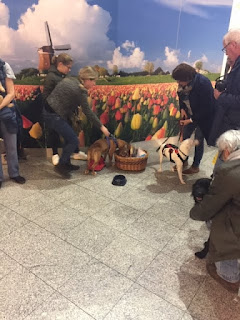 Dundi/Teddy, Mertens, Cooper and Ronnie with their new families 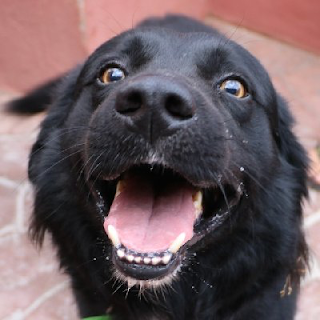 Roonie at the Refugio

I was with Fabienne when she received a series of belligerent phone calls from Roonie's owner. A very aggressive man who insisted that she take Roonie immediately, because he had an inheritance from his father and wanted to travel and was going tomorrow! She had to take him!!!! Now!Despite repeated requests from Fabienne that he send a photo (so often these 'little' dogs turn out to be Pitt Bulls!) it took several requests - in all he phoned her 12 times - before he rudely finally send a photo. This was no little dog, but again not a Pitt Bull. As always in such cases Fabienne acted in the interests of the dog. Roonie arrived next morning, with his owner who was even nastier in person than on the phone. Despite this, the poor dog was so distressed. So you can imagine how delighted I was to discover that Roonie was on the same plane as Teddy and equally delighted to meet his new family. I know he will have such a happy life now. 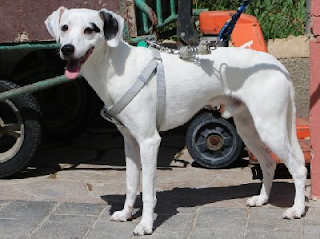 Copper at the Refugio

I had also met Copper when I was in the Refugio in September. His too was a sad story. Rescued by family about two years ago, he finally had a happy life. But then they had to get back to their country. But their doggie, whom they had saved from the street, had to go. How can people think like this. You take a dog into your home for life. Not just when it suits. But like Rooni, when Copper was handed over his life collapsed. It's hard to know what is worse - the despair and grief of those who have known a home, or the suffering of those who know only fear and abuse. Poor Copper was in a state of panic - where were his family? His family had washed their hands of him, but nevertheless had the cheek to ring up the next day to ask how he was doing. How do you think? But now Copper has a real home again, with a loving couple who won't abandon him. 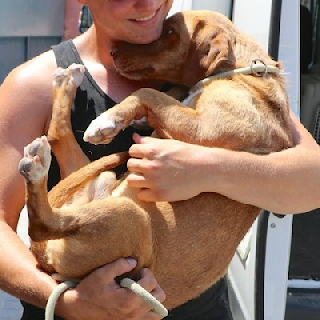 Mertens with the student who helped heal his fear

Little Mertens, a beautiful Podenco Maneto, sat in the killing station. Terrified. Waiting for the final injection. When we took him out of that terrible place he couldn't know where he was going. How could he? So he remained petrified with fear. One of our lovely students took charge of him, talked to him, calmed him down. And so gradually he relaxed, which touched our students heart. He remained fearful after his terrible experiences with an unscrupulous hunter and again in the killing station. But love and patience prevails. Mertens stepped out of his crate at the airport with more confidence. And that will only grow with the love that will be showered on him by his adopters. 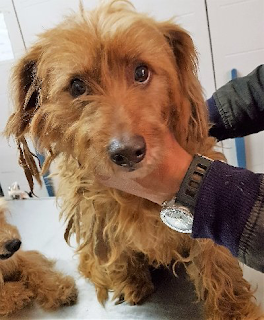 Dundi on arrival at the Refugio


I first saw Dundi (Teddy) on the website. He looked so woebegone. So bedraggled. His was another horrible story. He had lived in a house where they hoarded dogs and cats. The poor animals lived in their own excrement - utterly neglected. The neighbours complained about the crying and howling but it took a long time before anyone did anything. When the police finally did something they were legally obliged to take them to the killing station. Yet another frightening and horrible experience for them. Fortunately Fabienne and her team were allowed to intervene. Dundi, like the others, was riddled with fleas and ticks, his fur matted, his skin infected. Dundi has only three legs - we don't know when or why it was amputated. It may even have been a birth defect. You'd think that, after such foul treatment these dogs would have been difficult. But nothing could be further from the case. They didn't growl or get angry. They gratefully submitted to being washed and treated, reacting only with wagging tails and doggie kisses. Dundi, now Teddy, has the sweetest character. You'd find it hard to believe he had such a terrible past. He lay quietly in his crate in the car during the long journey back to the UK. He is bright and alert and so very good.

Sadly, virtually every dog adopted from ACE has a similar terrible story.The wonderful news is that for thousands of them, there are happy endings in forever homes. Here I have told the stories of just four dogs. Four dogs who arrived in Eindhoven one Monday, morning to be greeted by their adopters eager to shower them with love. This is what ACE does. Together with brilliant, caring young students, tireless volunteers, compassionate sponsors and supporters Fabienne and her teams rescue dogs and cats in every imaginable state of abuse and neglect. They care for them, love them and find them forever homes.

For Roonie, Copper, Mertens and Dundi/Teddy their horrible experiences are over. They are home. As are many thousands of others who were fortunate enough to be rescued by ACE-Shin. And everyone there is working tirelessly to create more happy endings for all those still waiting, still hoping and still to be rescued.